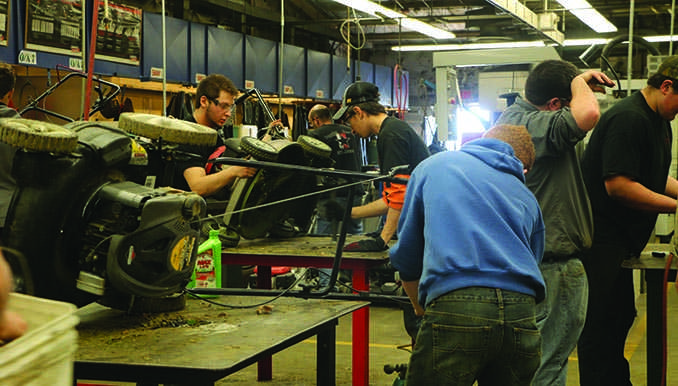 Cleaning the Mowers for SkillsUSA

On Saturday April 2nd, the SkillsUSA Club students took on the tremendous task of cleaning more than 170 lawnmowers in the MN industrial tech shop. Their goal: raise money to send qualifying students to SkillsUSA Nationals in Louisville, Kentucky.

It all began 19 years ago when some students wanted to do a little work on their own lawn mowers and eventually decided that cleaning people’s lawnmowers would be a great way to serve the community. Over time it grew into an opportunity in which students could raise money for SkillsUSA.

Recently, however, it has been a way for many students to experience organized work, the handling of supplies and equipment, and completing set tasks.

“It may have started out as a learning experience and then a community service project, but the students that have done the lawnmower cleanup will tell you they have learned a lot more than just making money to possibly go to nationals,” Welding and carpentry teacher Dave Patten said. “There have been a lot of life experiences learned by doing this project also.”

According to their website, SkillsUSA is a “national organization serving teachers and high school and college students who are preparing for careers in technical, skilled and service occupations.” The organization has more than 300,000 students and advisors join annually and has served nearly 12 million members since it was founded in 1965.

The organization hosts local, state, and national competitions in which students must demonstrate occupational and leadership skills in over 100 areas. The SkillsUSA Club is led by Patten as well as welding teacher Ian Koch and carpentry and engineering design teacher Greg Dunn.

The process of cleaning a lawnmower has more to it than many people may realize. At 8:00 in the morning, the doors open for people to bring in their grass cutting machines to the team of about 30 SkillsUSA students. After unloading, the students tag the mowers with the owner’s name, so as to not get them mixed up or argued over by an envious dad. Then they are rolled into the shop and lined up for stage one of the job.

Once at the front of the line, the mower is picked up and set on its side on a worktable where two students remove the blade to be sharpened and drain the old oil. While the blade is being sharpened in the back, the students scrape the under-side of the mower to remove any caked and hardened grass.

“Dealing with the oil and scraping is definitely the messiest part,” said junior Rees Schmidt, “My hands and shirt were covered with oil by the end of the day. I even had oil on my face from it getting wiped everywhere.”

The sharpened blade is returned and securely reattached, and the crankcase is filled with fresh oil to keep it running well. Next, the mower is taken down and lined up and to be power-washed to remove dirt and grime and give it a fresh new look. Just before washing however, the blade and oil are rechecked to make sure they have been done properly incase a mistake had been made along the way.

After washing, it is blow-dried and lined up neatly, waiting for its owner’s arrival. Once the owner arrives, they pay $30 for the job (a small part of the roughly $4000 cost of sending students to Nationals), and the students load up the freshly cleaned masterpiece into the owner’s car, ready for another year of work.

“I hope when students help at the lawn mower clean up or at any event like this they feel a sense of pride for doing something for someone else,” said Patten, “and a feeling that they are doing something worthwhile.”