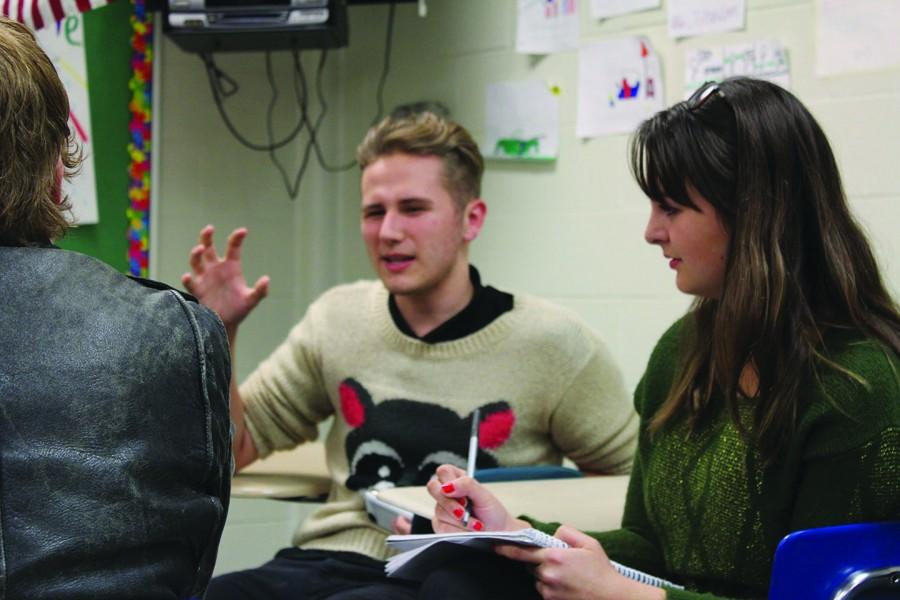 In a room with complete strangers, one can feel more welcomed than ever before. This is Slam Poetry Club. A handful of kids meet once a week with three teachers who come from UNO to help them advance in their poetry.

The three teachers, Colleen O’Doherty, Nick Bell, and Jacob Narofsky, give the four members, Junior Helen Whetstine, Junior Tricia Hughes, Senior Aubrey Gilson and Senior Jacques Lerouge, prompts on what to focus their poem on. Then the members spend a 10 to 20 minute period working to craft an emotional and moving piece. After they are finished, each member is given a chance to share their poem and receive feedback. This is the time where the teachers show them where there is wiggle room for improvement.

The piece that is created here is known as a slam poem. Students use these poems as the way that their emotions are shared. Slam for the feeling that the poems bring to your gut.

“I feel a good slam poet is somebody who really knows emotions and how to convey them. Whether it’s their own, or a generalized feeling, slam poetry is about being passionate. Passionately sad or passionately happy, it doesn’t matter as long as it’s passionate,” Lerouge said.

Slam Poetry Club helps students to take the things that they are passionate about, put them into words, and present them in a way to sway the audience into being passionate about their topic. When writing a poem, each member has a different technique.

“Sometimes I’ll write 10 poems within a week. Sometimes I’ll go a month or two without even trying too. Someone once described it to me like a fruit tree. A tree can’t continually produce apples. It has a season where it’s dormant, a season it grows and gains nutrients, and then only after that does it actually bear any fruit,” Lerouge said.

Each writer uses their own signature technique in his or her forms of writing. Whether it’s the way their poem is listed out or the noises they make on stage, they’ll each take their own route to swaying the audience’s emotions.

“Slam Poetry Club has allowed me to become more descriptive in both my poetry and academic writing,” Whetstine said.

The main purpose of this club is to prepare writers for the National Slam Poetry competition known as Louder Than a Bomb. Louder Than a Bomb (LTAB) is a citywide competition that occurs in late March and early April. This year, the completion will start March 17 and end April 20. LTAB is held in Omaha’s very own. The Holland Arts Center.

“I love performing, I love sharing poems with others and hearing other people perform their art. The only downside is if you stumble, but even then the support from the crowd is astounding,” Gilson said.

Some members of the club, Lerouge and Hughes, have taken what they learned from poetry club and have used it to perform outside of LTAB. A common ground for performing can be found downtown at the Omaha Healing Arts Center (OM) Center.

Located on 13th street, The OM Center houses a very popular slam once a month. Omaha’s slam poetry team runs the slam. Once a month, numerous strangers, all with different emotions and pasts, will come together to listen to other strangers express themselves. Ultimately, creating a bond between the performer and the audience.

“The atmosphere of a slam can make you feel so at home. It is so incredibly open-minded and I come out of every slam knowing more about the world and meeting amazing people,” Hughes said.