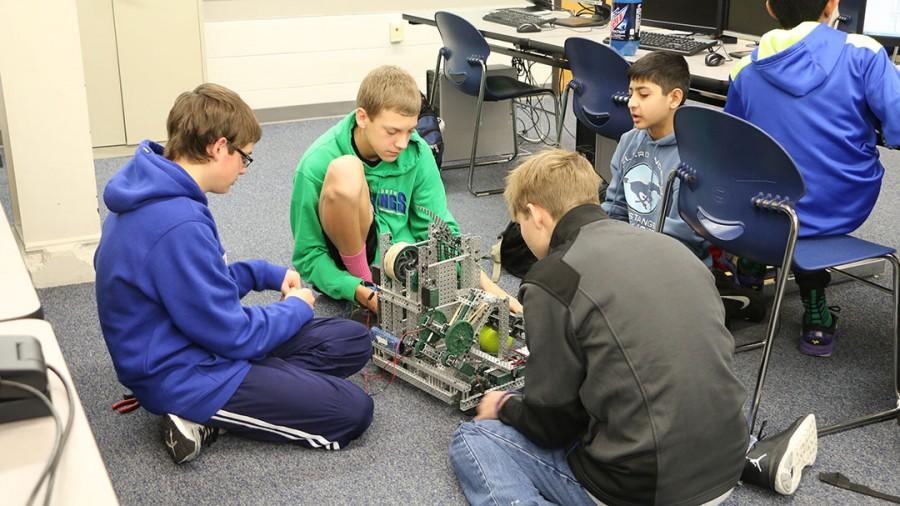 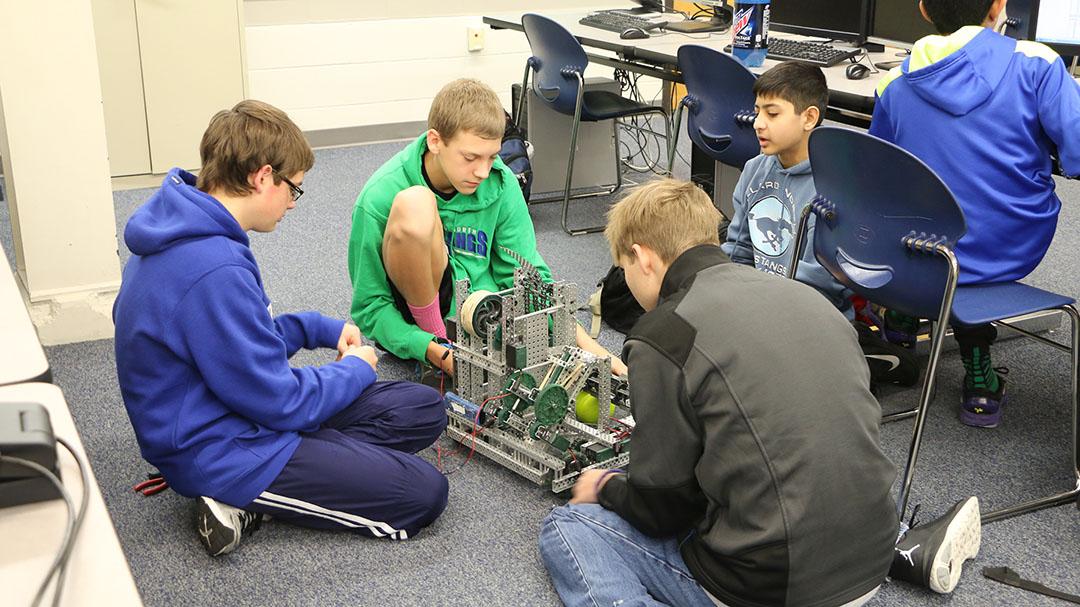 Because technology has grown into everyday life, robot engineers have been able to find more ways of simplifying systems. These builders are starting with the Robotics Team here at Millard North.

Established five years ago, the MN Robotics Team has taken a leap to the top this season. Within their first competition, three out of the five robotic teams are already qualified for State.

Soon, Robotics Club will be attending the TEchnaPWN Tournament on February 6th, 2016, hoping to continue qualifying and competing to the top, towards Worlds.

During competitions, Robotics Club is a large group split up into several teams, each with a Driver, Programmer, Notebook, and Builder (there may be more than one). Junior Trisden Carbaugh is the Driver of the 5609D Trojan Mustangs, who helps build the robot from scratch.

“I had built a Lego XT at home, and I wanted to take it to the next level by being able to compete with robots,” Carbaugh said.

Industrial Technology Teacher Chris Burke is also their sponsor. He has helped each team achieve their goals by making sure they have everything in order and giving them the confidence they need to compete. His sponsorship has helped builders have a better chance of making State, Nationals, or, even better, Worlds.

These kids have a great chance to win. They compete well, and they’re used to success. It’s all because they want to be the best”

This competition season, also known as “Nothing But Net,” the MN Robotic teams are creating a basketball launcher, with materials provided by VEX Robotics [Founder Corporation To Robotics Competitions].

With help from Burke and from each other, the team has high hopes for winning at competitions. In order to succeed at these competitions, builders know that they must practice often for the results they desire.

“Teams need consistency and practice. We need the driver to remain consistent, so we can score the most points. Therefore, gaining a better chance to win,” senior Sydney Carl said.

Throughout the season, students learn that Robotics Team is more than just building robots. It gives them skills that will help them in the future. Because program engineering is such a sought after career field in this day in age, the skills that they learn from Robotics Team can aid them in future aspects.

Besides the benefical skill set earned, students also enjoy themselves with other students who share similar interests.

“This is a really fun environment. You get to learn about building robots and engineering skills that will help you later in life,” junior Paurnima Ghotikar said.

Once students get into Robotics, they have begin to learn the rules and the programs that bring robots to life. While this may sound extremely challenging, Robotics Team members ensure that once you know the basic principles, it becomes simpler.

“Robotics isn’t hard, especially when trying to make something that works. It’s the learning curve and creating something that beats everyone else that makes it difficult,” Burke said.

Along with preparing for upcoming competitions, Robotics Team is perfecting their current projects, and doing several trials before their next competition arrives.

“As the year goes on, it becomes more and more difficult to compete because everyone is tweaking their robot to make it even better,” Carbaugh said.

Through the challenges they face the Robotics Team remains confident. At the end of the day, the team only wishes to to leave behind a new legacy of technology and pave the way for incoming students to have a future in robotics.

“I have the opportunity to be with amazing students. I set high expectations, and they will meet them or beat them. I provide the opportunity, motivation, and advice. They do the rest,” Burke said.