Spiking down setbacks to state

Volleyball team bounces back following over a dozen forfeited wins 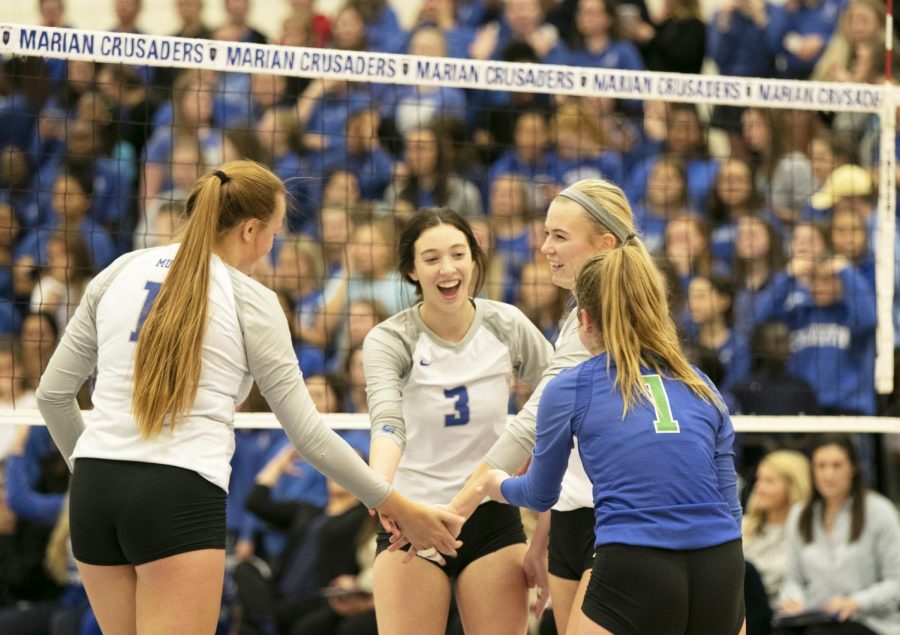 It can take up to 20 years for a saltwater pearl to form. For the varsity volleyball team, however, it took just one season to embody their theme of pearls, to prove themselves as capable of withstanding hardships and still returning victorious.

They were well into their season when they were notified of a roster mix-up that required the team to forfeit 14 wins, nearly all of their wins at the time. The misunderstanding placed them in the lowest seed, forcing them to play more difficult teams in future matches.

Following the setback, the team went through a period of shock and anger, as any team would.

“There was a little bit of time where we were like ‘this might be the end. This can’t be the end’. We just took time to think,” senior Mckenna Ruch said.

Still, the team almost immediately regained their footing. Rather than dwell on their misfortune, they mustered up the motivation to push on, even maintaining their goal of taking State.

“Within the next week after they came together and said, ‘You know what? We’re going to be the first team in state history to go 1-22 and win a state championship’,” assistant coach Meghan Callaghan said. “They just really wanted it. They wanted to prove to everyone they could still do it.”

Having already been successful prior to the forfeits, the team’s future game strategies strayed only minimally from how they had previously played.

Such a loss, however, can impact a team’s mental stability. For MN in particular, it called for an assurance of their skills and motivations.

“This year our theme is pearls, like having the grit to undergo lots of things but still turn out as something beautiful. Before games, we have quotes that deal with pearls or we have a gift. Even something small like that gets us all mentally in-tune,” senior Lauren Maciejewski said.

Perhaps one of the most fundamental, yet crucial steps was a simple affirmation on the team’s part of their ability to recuperate, as well as to ignore the negative input of others.

“A lot of people were doubting us. They didn’t think we could make it back to state after what happened, but we didn’t want to let that affect us. We just went out and played volleyball,” senior Eve Fountain said.

These efforts proved successful when the team faced Lincoln Southwest in a district match on Wednesday, Oct. 30. Their 3-1 win propelled them to state, an accomplishment many thought they’d never achieve. The win was monumental, especially considering they played a team much harder than they should have.

“[It felt] amazing.. It was like one of our state championships all over again,” Callaghan said.

This wouldn’t be their first memorable win of the season, however, as they defeated Papillion-LaVista 3-1 on Thursday, Nov. 7 in the first round of State. The win was, of course, exciting. More importantly though, it acted as the boost of confidence needed for the second round.

“It was a great feeling… winning that first game. We knew it was going to be tough because they were the highest ranked team going into the tournament,” Maciejewski said. “I was super proud of our team, and winning that game proved our accomplishments of the season.”

Fighting for a place in the semi-finals, the team battled it out against Gretna on Friday, Nov. 8 in a gruesome match lasting a full five sets. Despite the fuel from their previous wins, the girls lost 3-2, eliminating their chance at the State Championship. Still, reflection on their season allowed them to walk away content.

“Losing against Gretna made us really step back and appreciate the game. I was incredibly proud of how the team reacted to the loss. Rather than dwelling on the loss, we took time to realize how incredible our season was,” Ruch said. “At the end of the day, all of the ups make all of the downs so worth it.”