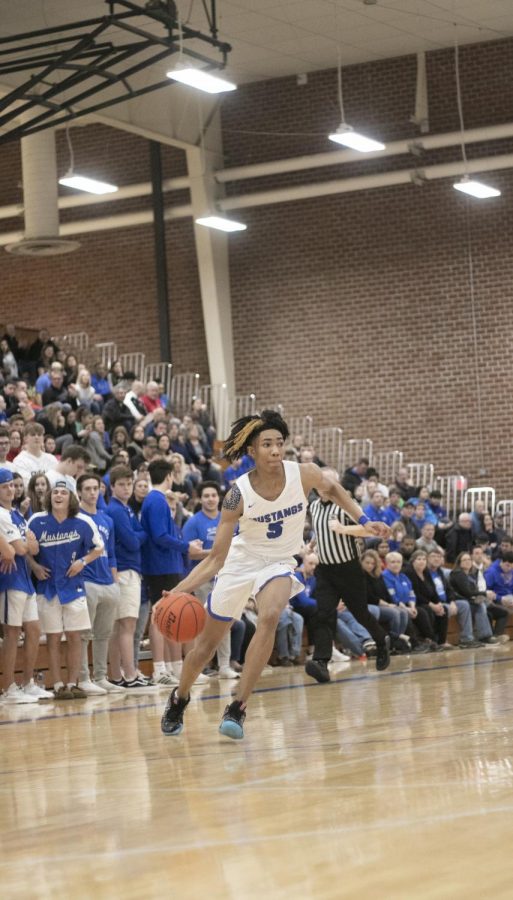 Junior guard, Hunter Sallis dribbles the ball past the defense. Millard North went on to defeat the Lincoln Southeast Knights 78-61.

Led by the deafening sound of a bass drum, MN’s white-themed student section’s spirit rises with the gradually intensifying chant.

Amidst the cries, junior Hunter Sallis, a point guard ranked eighth in the nation according to Rivals, makes a show-stopping dunk. The final score is 68-60. MN wins.

Defeating Creighton Prep on Jan. 3, leading to their first Metro Holiday Tournament title and Omaha Westside on Jan. 25, varsity boys basketball has had a stream of victories this year.

Varsity Boys’ Basketball, currently rated No. 1 amongst Nebraska’s Class A schools, won its first three games by a combined 79 points. Since then, the team has continued to maintain a strong record of 15-2 (as of print date), defeating Omaha North, Millard South, Creighton Prep, and more. The team is ready to face challenges outside of the local circuit, however, preparing to play IMG Academy, one of three nationally ranked teams, at the Heartland Hoops Classic in Grand Island.

“The Grand Island tournament is something I have been thinking about all season. It’s a really good opportunity to be able to face off against a team like IMG. Every day in practice is another day we work hard and get better in hopes of being the best,” sophomore Jasen Green said.

With high-level Division I scholarship offers for four players including Green, Sallis, Jadin Johnson, and Max Murrell as well as college offers for others, individual talent is a hallmark of the team’s play. However, Head Coach Tim Cannon notes that this alone is not a recipe for triumph.

As Cannon states, the team’s willingness to work together and work well together is clearly an indicator of their success. However, a changing coaching style may have been just as powerful.

“Coach Cannon used to not allow any missed dunks, but he has gradually gotten okay with it. He has started to let us do our own thing and have fun as long as we’re succeeding,” senior and Wayne State commit Noah Erickson said.

Cannon, coaching first at Omaha Cathedral High School after witnessing his father do the same since the age of four, began coaching  at MN seven years ago. Ever since then, the team states that he has been an integral addition to the team.

“Coach Cannon has had a great impact on me because he saw my potential early on. He and the rest of the coaching staff believed in me even when I didn’t believe in myself,” senior starter and Stanford commit Max Murrell said.

Under Cannon, the team hoped to win the Metro Holiday tournament and still hopes to win districts and state.

“I wanted to win [Metros] for my dad, my wife, my kids, and our team. I tell our team to cheer for each other in the locker rooms because they do a fantastic job,” Cannon said in an interview with WOWT News.

Cannon’s coaching style is dependent on understanding individuals’ uniqueness and developing teamwork. Cannon, whose own goals are impacted by the legacy of his father, has become part of a team who, at daily practices and weekly games, the team has found their own undying legacy: dedication to the game and a willingness to work together.