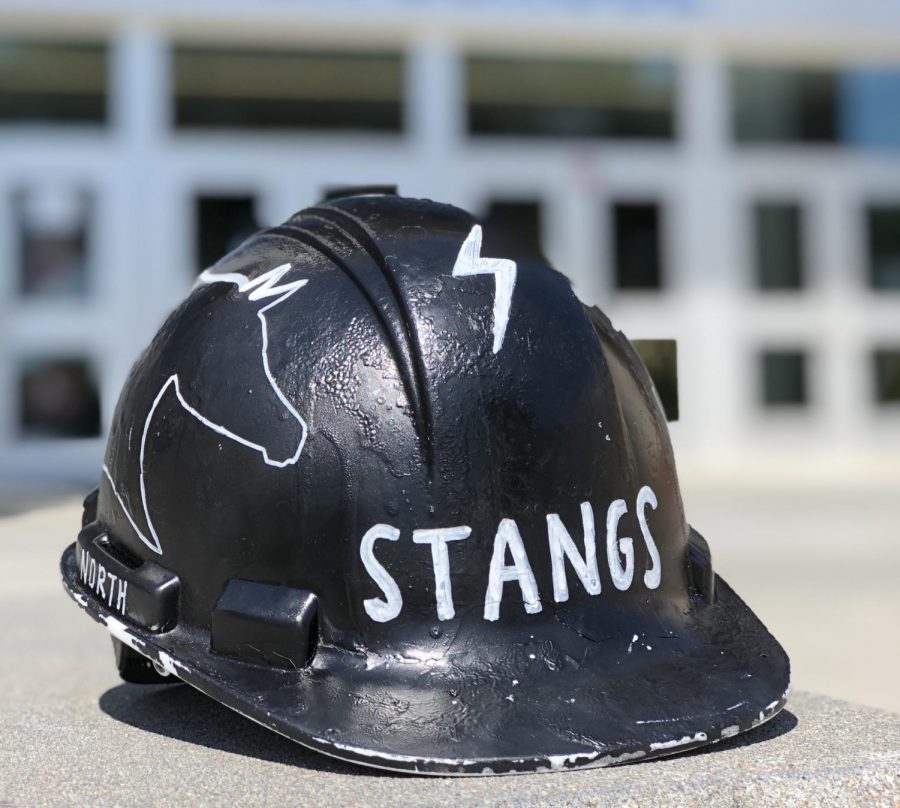 In the seconds before kickoff, MN’s student section is its very own ocean in the middle of Nebraska.

The resemblance is partially because of the theme “blue-out” and partially because students are excitedly jumping up and down, creating waves in the crowd. Six seniors stand in the front row, each with one letter of STANGS painted on their torsos in blue. Behind them, students scream themselves hoarse, all of them bearing MN’s trademark color. In this flood of royal blue, the sight of a black construction hat sharply catches the eye.

The hard hat. A simplistic but effective token of MN’s unique approach to a school spirit leader. Each year, one student is chosen to raise support for sporting events, lead pep rallies, and organize theme weeks — always while wearing the distinct and unforgettable black hard hat. However, what was once a symbol of school unification has recently become a source of controversy.

No formal application process exists, but typically, any incoming senior who is interested in the position submits their name to the current hard hat, and potential candidates are narrowed down to a top three before a final decision is made and announced in May. Contrary to common belief, the administration has a limited role in the hard hat selection process aside from vetting candidates to ensure they do not have a disciplinary record.

“The only advice we’ve offered up [to the current hard hat] is to keep us in the loop of who you’re thinking for the role of the hard hat. Since it’s a student-led thing, we’ve had a hands-off approach,” Principal Brian Begley said. “There is no set of rules written down, other than common sense and decorum being at the forefront.”

Senior Reghan Svoboda ran for the position during her junior year, becoming one of three final candidates alongside classmates Noah Erickson and current hard hat Austin Zorinsky. As the sole female candidate in 2019 and the second to make it to the top three in hard hat history, she notes that her decision to run was contentious.

“Honestly, being a girl, trying out for it wasn’t easy. I got backlash from a lot of people. A lot of the boys in my grade, even a lot of girls in my grade, didn’t want me doing it,” Svoboda said. “Friendships were tested. [People] didn’t want me to break tradition, or they thought I was just wanting all the attention.”

A portion of the controversy surrounding ‘breaking the tradition’ can be attributed to the mystery that shrouds the actual regulations of who can be nominated for the position — the only official rule being that the hard hat must be an MN senior. Common misconceptions include that the hard hat must be a varsity athlete or a male student, neither of which are explicit requirements. However, for some, aspects of the hard hat, like the gender of the titleholder, are considered an unspoken but integral part of the tradition.

“I think the hard tradition should stay the same because that’s the way it has always been. Also, I just think that boys have louder voices and can do the chants well and get our attention more,” senior Maria Circo said. “I don’t see a need for it to change because it has always worked the way it is.”

Circo is not alone in her worries. As a figurehead for the student body at various sporting events, many believe that changing the hard hat tradition would negatively impact the strength of the MN student section. The pressure to choose candidates who uphold traditional values and maintain the leadership of the hard hat has influenced the experience of those, like Svoboda, who challenge the norm.

“Running for that leadership position, it’s a huge responsibility. It wasn’t easy, even with me knowing Adam, [the previous hard hat]. I used to FaceTime [Adam] all the time to tell him he should let me do this,” Svoboda said. “After he chose Austin, I go: ‘you didn’t even tell me you weren’t going to choose me’. He said, ‘well you’re a girl, did you really think I was going to pick you?’ You just take that and you’re like, oh, I thought you’d be different.”

Although the concept of the hard hat has been a staple at MN for over a decade, suggestions to change the tradition have been made over the years. Some have called for a switch to multiple spirit leaders, which other Omaha high schools, like Millard West and Creighton Prep, have implemented. As recently as last year, athletes from female varsity sports considered creating a female hard hat position to help increase attendance at girls sporting events. This, along with Svoboda’s contentious run, has created a unique challenge for the current hard hat.

“I’m not opposed to a female wanting to support the girls’ teams, but I’m also just as okay being there for those games as well. It’s really not fair to varsity sports that are the same equivalence to not get the recognition,” Zorinsky said. “We have a lot of kids in our class who are willing to show up to things, and I just think that I can be there for everybody. And I know our class will be behind my back. And if we get everybody, it’ll be a great year.”

Many see new possibilities opening up for the hard hat to evolve in the future.

The battle between the desire to continue the conventional and to push for the progressive is still ongoing. But while some traditions are challenged, other things never change.

The sea of Mustang blue. The roar of the crowd. The meaning behind the hard hat.