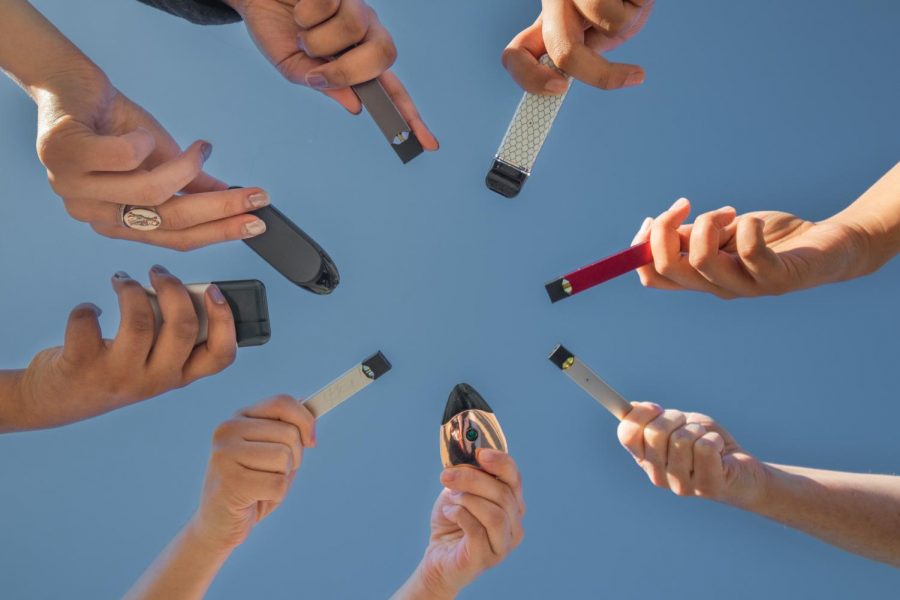 “I questioned what made others get sick or addicted and not me. For a few of the people I know, it did turn into a dependency that was hard for me to watch or be a part of.” —

Vaping, popularized by the billion-dollar company JUUL, is an epidemic and has been called such by the FDA since 2018. But over the past two months, twelve deaths across the U.S. and as many as 800 hospitalizations–five reported just this month by CHI Health Center–have led to an explosion of research on the topic.

Teenagers often deserve the title of bad decision-makers. But in this case, JUUL’s marketing strategy has received more of the blame. The company created a viral fad that, two years ago, when much of the information we have now was unavailable, seemed safe(r).

“I thought juuling was definitely safer than cigarettes or any other products. I knew overuse and addiction were definitely a problem. But, I didn’t think there was any more to it,” MN student Mary Barnes said.

Furthermore, until August 2017, the company had no age or amount restrictions related to buying on its online store, allowing minors to buy products and majors to sell with ease.

“A kid who graduated and got it from a shop and ended up giving it to me. That’s how I ended up getting started; a lot of my friends did it, so I did it too,” MN student Thomas Johnson said.

Careless selling and a youth-based campaign sparked the vaping epidemic in youths. Unseen consequences continued it.

“I did it in the car whenever I was bored. There were no benefits, but no negatives, and I never got addicted, though I did question what made others get sick, and not me,” Johnson said.

Vape companies targeted teens with colorful campaigns and a variety of scents that separated e-cigarettes from the stigma associated with traditional cigarettes. In the end, however, there seems to be no difference between the two.

“Because users of e-cigarettes are younger, the onset of severe symptoms is often slower, making it challenging to identify the harms. But, there is a recognizable pattern of inflammation and damage to both airways and the lung tissue itself,” pulmonary specialist at CHI Health Clinic Douglas Moore said.

Despite this information, the crisis has continued.

“The tough part is vaping is a pretty new fad among teens and the research about the dangers is limited.  Health professionals are just now starting to make connections between vaping and certain lung problems,” MPS Director of Student Services Bill Jelkin said.

The MPS school district has made continued attempts to curb use and possession. The numbers show that, regardless of the policy, vaping, among teenagers is still rising at unprecedented rates.

“I knew there were [disciplinary consequences]. I had a lot riding on not getting caught,” Barnes said.

“The three-day suspension has drastically reduced the number of students with vapes that we have found or those who do it on school grounds, but I don’t think it’s put a dent in the number of kids who vape,” assistant principal Casey Lundgren said.

Therefore, for many, the only hope seems to lie within education.

“Education about the dangers and risks associated with vaping will be the best deterrent. Hopefully, the research will continue and more information will soon be available to help schools, parents and the general public steer young people away from vaping,” Jelkin said.

Students have quit because of new research. But, just have many have continued because of peer pressure and addiction in spite of the rising threat. As a result, a perfect solution for this epidemic may never arise.

Teenagers have molded the future through e-cigarette usage. From vaping in bathrooms to being taken to emergency rooms, the product has influenced the lives of all students–in and out of school.

“If I handed you a Juul right now–just one hit–would you?”