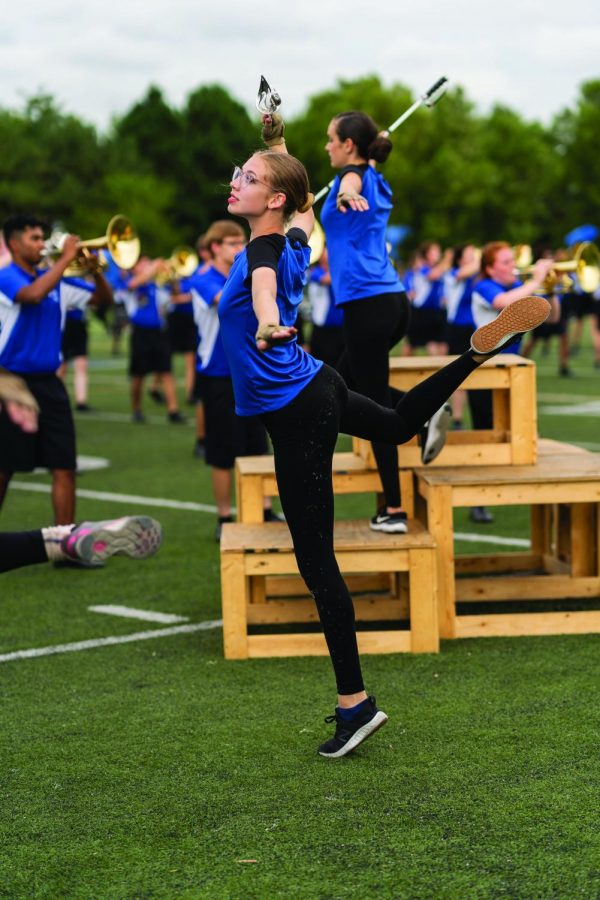 “We’ve dreamed of this competition since freshman year,” senior Alice Young said. “It was finally time for that dream to become a reality.”

On Oct. 18 and  Oct. 19, the MN band attended the Bands of America Competition (BOA) in St. Louis, MO. The competition was between approximately 70 bands from 10 different states. The band had the opportunity to play in a dome for the second time in their history.

“It has been a stepping stone process. This year just worked out perfectly,” director of bands Ryan Placek said. “It really had to be the right moment for us. I didn’t want to just jump in.”

The band had been planning to go to the competition for several years. Last year, they attended a regional competition in Minneapolis as preparation for the BOA competition, where they had the opportunity to play in the dome for the first time.

Performing in a dome has been an entirely new experience for the band, given that there are no weather issues to deal with.

“We always say, ‘it’s 72 and sunny in the dome all the time’. We wanted to go to a smaller show like Minneapolis last year to see how things went. Going to that show and seeing the process helped us prepare for St. Louis this year,” Placek said.

This year’s drum majors include seniors Bridget Peterkin, Alice Young, Michaela Petersen Jensen, and junior Hailey Revord. They have had to help push the band to this ‘next level’.

“ I think that the directors thought it was really time to push us to that next level, and this is the year that we were ready,” Young said. “We had to put in a lot of extra work into the show and get focused and all get hyped up. So every week it was like, ‘guys, we’re a national band now. We need to practice like one.’”

BOA proved to be a learning experience for the band. Although there were high expectations, ultimately, their reason for competing was to see other bands and improve their own performance.

“For us, it was more as a learning experience for our students to go check out some of those bands. Our students were able to watch the performers up close and see the level of buy-in from each student to their performance level,” Placek said. “On the field, every single student is playing. Every student is performing and fully ‘on’ all the time.”

The students watched the best bands in the country, including those who have won national championships multiple times.

“It was crazy just to see the other programs that we weren’t able to see on video, but live and in person. It’s such a different experience. We’re able to connect with these different bands and see that the most advanced band kids in the nation are students just like us,” Peterkin said.

While the band’s rehearsal process was consistent with previous competitions, the focus and urgency of the directors and students increased.

“We still went through the same rehearsal process, but there was definitely that additional layer of motivation and a little bit of stress on us,” Peterkin said. “We had this huge competition looming over our heads, and while there were a lot of expectations, it was more of an opportunity because no one knew who we were so there was no precedent of what we had to place.”

The new competition not only brought this newfound motivation and a more tight-knit group, but it also gave the band the opportunity to begin some new programs.

This season, Young began a Person-of-the-Week initiative in order to motivate and showcase the students more. Every week, a hardworking band student wins a prize.

“I just feel like we needed more individual recognition of people doing well and kids that were really working hard,” Young said. “Each week it was just picking the person that I thought was doing the most and just deserved that recognition.”

Freshman Zach Clark and senior Ore Ogunleye are two students who have won.

“Getting the recognition as a freshman was really awesome. It made it even better because it was a big year for us, and it let me know I was doing well,” Clark said.

Young believes that the ambiance has changed with the band’s new opportunities and traditions.

“Even the culture of the band has shifted in the past four years. During my freshman year, things were very separate, the freshmen band did their own thing, and the varsity band did theirs. The varsity band was all about competition and winning. I think over the years, it’s become a much tighter knit group,” Young said. “Especially this year, it’s been all of us working towards one goal of making each other better.”

The band believes that they will take more strides next year, but for now, they have taken a moment to reflect on their achievements.

“The mantra in our band is ‘we don’t do it for a piece of plastic, we do it for each other.’,” Peterkin said. “The most rewarding part about stepping off the field is just seeing everyone smiling and so proud of how we did. At the end of the day, that’s way more important than any trophy that we receive.”