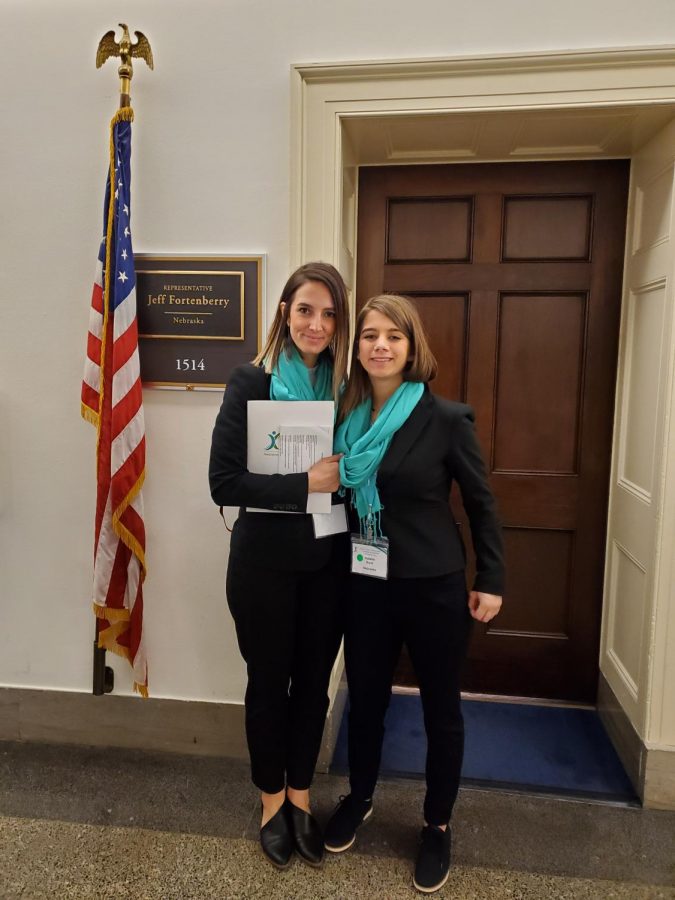 Forty-eight hours before hospitalization, freshman Natalie Burd was watching a softball game, casually stretching her legs out in the stands after competing just minutes before.

The afternoon was punctuated with clear blue skies, the rare kind of perfect April weather in Nebraska. While Burd watched the players on the softball diamond, she felt a sensation in her body, comparable to a vaguely painful sneeze. The subsequent uncontrolled jerk of her head caught her mother’s attention, as did the continued head shakes that followed. In the morning, the head shakes seemed to fade. Yet days later, Burd was hospitalized and later diagnosed with Tourette Syndrome.

Tourette Syndrome (TS) is a neurodevelopmental disorder characterized by ‘tics’—involuntary, repetitive movements or sounds. Approximately 1 in 160 children ages 5 to 17 have some form of TS. However, more than 50% of individuals are never diagnosed.

This discrepancy between the rate of incidence and diagnosis is largely due to TS’s wide spectrum of symptoms that present uniquely in each individual. Burd’s symptoms began when she was in eighth grade in the form of an involuntary arm movement that doctors originally mistook for a softball injury. After experiencing increasingly severe symptoms, Burd was hospitalized.

“It spiraled out of control from there. I looked like an acrobat doing it. My feet would touch my head, and I’d get stuck for an hour or two,” Burd said. “Then, I’d look like I was having a seizure. My eyes would roll back; my head would shake, but it was just one of my tics.”

Burd’s mother, Alesha Smith, details the days after her daughter’s sudden diagnosis, when her involuntary movements developed into vocal tics, beginning with nonsense words like “bumblebee” and “polyester”, before evolving into swear words—a symptom known as coprolalia that only 10% of those with TS experience. Burd, who was studying World War II in history class at the time, also frequently repeated suggestive phrases, like “Hitler is dead” and “Hitler is in a gang”.

A year after the diagnosis, Smith encourages others to understand TS, starting within her own family. When Smith asks her six-year-old daughter, Mara, what to say when others ask, “What’s wrong with your sister?”, Mara immediately replies, “She can’t help it.” Mara remembers spending many nights at family friends’ homes while Burd was in the hospital with her parents. She also vividly recalls never being afraid, knowing that her sister’s doctors would “take good care of her”.

Despite her supportive family, Burd notes that a lack of knowledge about TS and its symptoms have shaped her and many others’ experiences. In particular, Burd recalls an instance in which her sniffing tic resulted in her being approached by a mall security guard and told to leave a store because he assumed she was on drugs. In addition to tackling the difficulties of her diagnosis, Burd faced other obstacles in her community.

“In eighth grade, there was a group of people who would tell me: ‘Stop doing that. It’s not a real thing,’” Burd said. “People don’t know ‘hey, that’s Tourette Syndrome.’ They won’t know to feel empathy. They’ll say that you have bad behavior or it’s just bad parenting.”

According to the Tourette Association of America, 63% of families with children with TS feel they have been discriminated against in school. This discrimination due to perceived behavioral issues—coupled with TS’ impact on the ability to maintain concentration—can heavily affect a learning environment. To combat this, Burd’s family works with MN teachers and counselors to formulate an individualized plan. Burd also finds comfort in her school activities, like marching band.

“Did she tell you she doesn’t tic when she plays?” Smith says, beaming. As a self-proclaimed “band mom”, Smith remarks that her White Ford Explorer has transported a number of MN band students and that she loves watching Burd interact with her bandmates. The baritone, trombone, and bass guitar cases propped up next to Burd’s living room couch are evidence of her love of music. They also represent a key aspect of Burd’s condition.

There is no standard treatment for TS, and specific medications are only effective for certain individuals some of the time. These challenges have led some to seek music as a means of therapy. For Burd, her involvement in music was also a path that led her to a new, welcoming community.

“I was scared to come to high school. Then I found this group I just clicked with in band, and it meant a lot. The people here, they didn’t question it. They told me, ‘you’re one of us,’” Burd said.

Burd’s personal journey inspired her to inform others. In the fall of 2019, Burd applied for the Youth Ambassador program of the Tourette Association of America, an initiative that trains teens to advocate for TS and promote tolerance within their communities.

“It’s a bunch of people getting together to complete one mission: to tell others about Tourette Syndrome, to let them know what it is,” Burd said.

For National Advocacy Day on March 4, Burd and her mother traveled to D.C. to speak with state representatives about legislation for TS research and medical care, including a bill that would allocate $2 million in funding for TS within the Center for Disease Control.

Yet, the pair maintain that their mission ultimately resides in connecting directly with other families. Burd has a pen pal, an 11-year-old girl in Toronto recently diagnosed with TS, and Smith regularly speaks with the girl’s mother—all four finding support in their shared experiences.

“You have to have sorrow before you see joy, and I truly believe that our mission now is to help other families realize they’re not alone,” Smith said.

While Burd continues to navigate through her TS, she utilizes her experiences to share a message with others.

For those who are curious: don’t point fingers. Don’t whisper. Calmly ask. For those with TS who haven’t found their community: remember it will get better. Remember that there will be true friends who accept you. Know that her family has an open door policy and ‘you can stop by her house anytime’, she adds while laughing.

“It’s part of who I am. It’s part of my family,” Burd said. “Going through all that, I want others to know that you will find people who accept you—I did.”