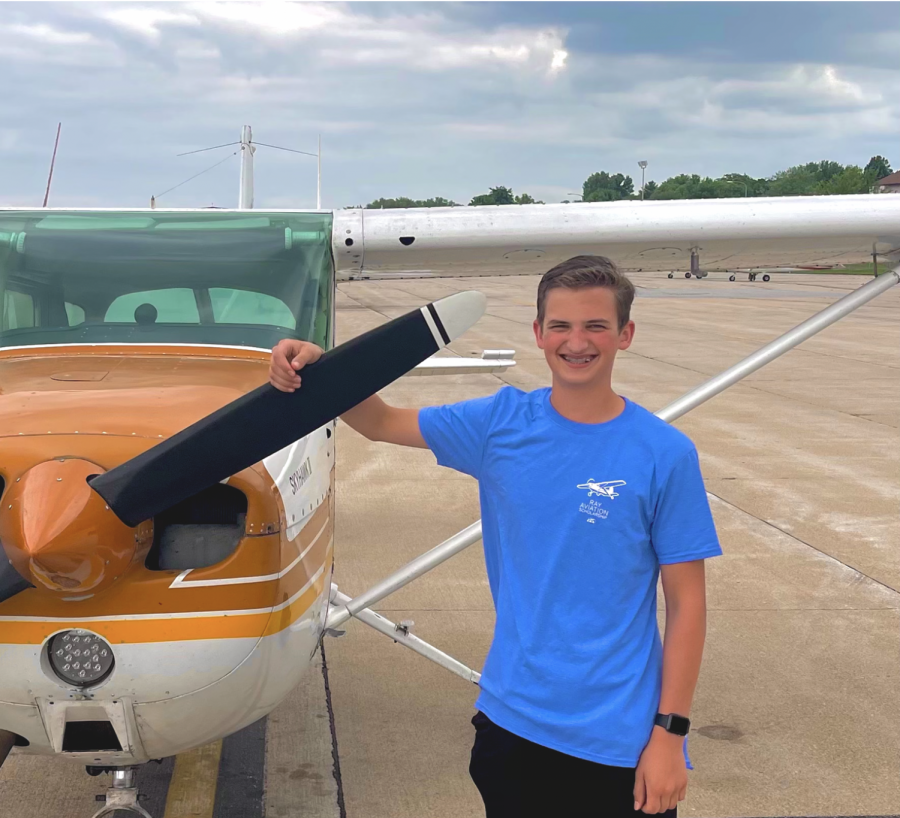 “Over the summer, it was nonstop flying.”

Not many young people find themselves speaking this sentence. Junior Patrick Stolinski is one of the few who has received that opportunity.

“About three years ago, when a family friend of ours took me up in his small engine airplane, [he] let me take control for a little bit, [and I did] a couple of turns. That kind of set the flame going, and from there it just grew,” Stolinski said.

Traveling back in time, Stolinski’s mother Susan Stolinski said that his passion for flying didn’t start then, but when he was nine or ten years old, using online flight programs.

“When he was young, we took him to places, typically children’s museums, that had flight simulators, and he enjoyed that so much that he looked online for simulator programs,” S. Stolinski said.

By joining the Civil Air Patrol (CAP) Cadet Program in September 2018, Stolinski began to turn what used to be a simulation into a reality. As a member of his squadron, Stolinski furthered his knowledge of aerospace, leadership, and emergency services.

Early in 2021, Stolinski set his eyes on an Experimental Aircraft Association scholarship, which would pay for up to $10,000 towards his private pilot license. After receiving the funding halfway through June of 2021, Stolinski began his training by first picking time slots to work with his instructor and renting a Cessna 172 airplane from Oracle Aviation at Millard Airport.

Although some may be intimidated by flying high in an airplane, Stolinski chooses not to be; he says that being anxious is how accidents happen. Instead, Stolinski finds the activity relaxing.

“You look down at the cars and think, ‘haha, I’m better than you’. But it’s a very surreal experience, especially when you’re up there by yourself with the sunset in the background. It’s just very peaceful,” Stolinski said.

In addition to taking flying lessons, Stolinski has done work outside of the plane that helps take his skills to the next level. By taking industrial technology classes from teacher Jeffrey Brady, Stolinski has had the opportunity to further progress his problem-solving and critical-thinking skills in regards to airplanes.

“[Patrick is] thinking about different ways the airplanes could be designed and finding little problems that would be tedious [to fix] in a plane; transferring that into 3D design, prototypes, [and] testing them,” Brady said.

Using those critical thinking skills, Stolinski was better equipped to work towards completing the requirements for making a cross country flight this summer: writing out wind speeds, accounting for the weather at the time, and calculating other variables from one point to another before making the flight.

“In theory, if you were having to fly without any of the fancy computers, you still could,” Stolinski said.

“What’s really cool is, as you get further into the evening and as the sun starts setting, just seeing the city light up; the airport lights, those coming on,” Stolinski said.

Although Stolinski does not consider flying itself difficult, he acknowledges two things one must learn to make the process easier.

“One, learning to have an advanced understanding of the weather; [and] two, having a very good mental picture of the world environment around you,” Stolinski said.

Through all his training and experience, Stolinski has proven that he is qualified to fly a plane. S. Stolinski, although in a position where other mothers might be anxious for their children, has confidence in Stolinski’s abilities.

“I can’t imagine being nervous each time he goes up in a plane, or to a further extent, gets behind the wheel of a car.  He has learned the necessary skills, so now his job is to use them,” S. Stolinski said.

Although he hasn’t earned his private pilot license yet, Stolinski will be able to take his final check ride when he turns 17 (the minimum age requirement to get the license) this May.

Until then, the flame will keep burning as Stolinski continues to take to the sky.