Singing to the stars

Introducing the MN a capella groups, Northern Lights and Nova 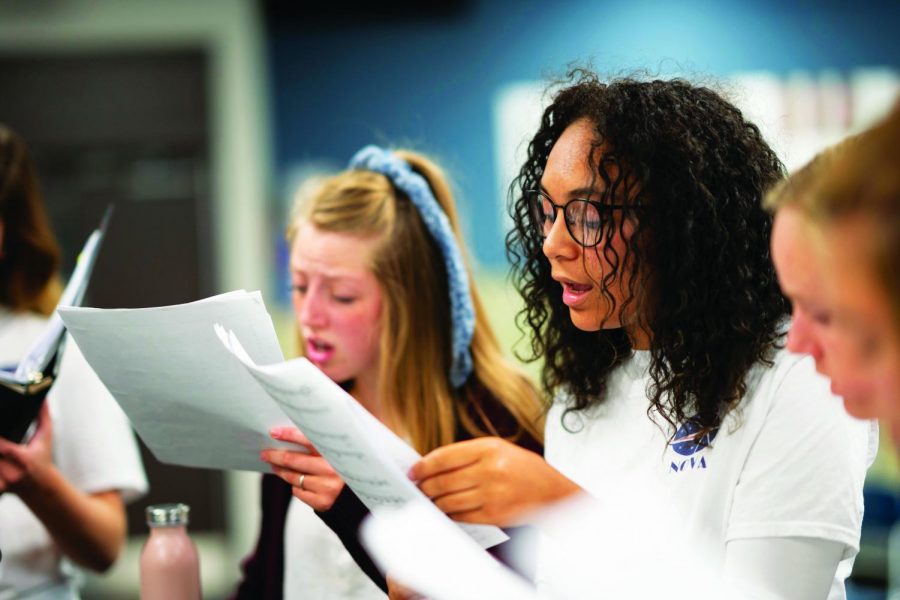 Juniors Kail Townsend and Josie Parker practice their harmonies. Both groups are set to perform on December 12th at the Millard North choir concert.

Nine people gathered around a piano. One presses a key and another begins to count, “five, six, seven”, and Jeff Buckly’s “Hallelujah” floods the room with joyful noise. MN’s student-led a cappella groups Northern Lights and Nova are embracing this art form for the first time at MN and they’re continuing their a capella groups without the help of a teacher or a director.

These ensembles are making  strides for a group that just two years ago was “Just a bunch of boys who like to sing”  according to junior leader of Northern Lights Fodjo Kanmonge.

Up a few octaves is MN’s all women’s a cappella group Nova, who are singing their way into their second year as an ensemble. Nova was invited to sing at the Millard Kickoff this year, an opportunity they weren’t going to waste

“We practiced over the summer and performed ‘Imagine’ by John Lennon and ‘Here comes the sun’ by the Beatles for the whole Millard staff. It was an incredible bonding experience,”  senior and Nova leader McKenna Cottone said.

Both groups are entirely student-led, which means they get no input, help, or budget from staff or administration. Because of this, a large amount of leadership is required from the student members.

When the group began, Cottone was the one chosen to lead the charge: “I was thrown into it very abruptly. I had no idea what I was getting into, and I really didn’t know what it took to start a group from the ground up,” Cottone said.

Cottone has to handle most of the background work that a teacher would do such as picking out songs, arranging them, and finding places to perform.

“The arrangements we do find are often unprofessional, so [senior] Cece Tuttle  and I typically have to change some of the parts so that they fit better,” Cottone said.

The members of Northern Lights handle things a little bit differently. At the end of every year, the members hold an election to decide who the next year’s leader will be. Last year Fodjo Kanmonge won unanimously.

“It’s not like a dictatorship. Our leaders are there to guide, and everything we do is democratic,” Kamonge said.

Getting the entire group involved in making decisions is important to maintain the team atmosphere.

“We’re such a democracy that it took us at least twenty Group-me polls to decide on our t-shirt design this year,” junior Christian Lund said.

As for anyone looking to join either of these groups, the groups emphasize that being vocally gifted is not their only criterion.

“We don’t look for good singers, we look for exceptional people,” Kanmonge said.

This belief is mirrored across both groups.

“You have to have an innate desire to sing the music,” Cottone said. “You have to be a dedicated, passionate musician.”