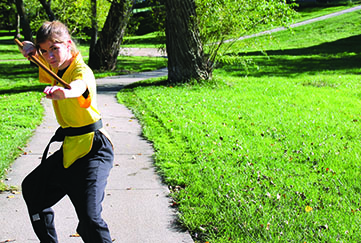 SNAP! Red blurs by her face. SNAP, SNAP! The loud thunderous sound is all she hears in the quiet urban neighborhood, as the traditional chinese fans zoom through the air.
Nunchuck chains ding, longstaffs snap against one another, and wind whistles as it collides with scythes. This is yet another typical Saturday morning for the Olari family.
Between the sparring, grappling, weapons and board-breaking, freshman Jaina Olari has a lot to practice in order to get her 5th degree black belt in mixed martial arts (MMA).
At the age of nine, after six long and painful years of being bullied, Olari took up an abnormal sport for a girl, MMA. It allowed for her to build up her physical and emotional strength.
“I had tried everything to make the bullying stop, and when I saw it starting to become physical I knew that the only thing I could do would be to build Jaina up on the inside. Build up her self confidence, build up her self-esteem. And then also develop some skills so that she could protect herself,” Jaina’s mother, Sue Olari said.
The trauma Olari faced as a kid has led her on a journey with no regrets. It has shown her that hard work does pay off. Olari and her partner were honored in the Mixed Martial Arts Hall of Fame last year, and hope to travel to Jamaica the summer of 2018 to compete in the world championships.
“I plan to eventually get first place in world championships like my teacher Colton Decker,” Olari said.
Even as her journey is coming to an end with her RWTB (Rosenbach Warrior Training Branches) family, Jaina feels she will never stop pursuing MMA. Whether it be starring in movies or teaching others.
“I really hope to just start teaching. I do teach, but not as much as I would like to. I want to inspire more kids to join, and help adults be as good at weapons as I am and become even better than me,” Olari said.
Although MMA is not a sport pursued by many girls, Olari has found that her adventure through the rankings has inspired many girls in the Omaha area to try and pursue it as well.
“Me and my martial arts partner were the only girls, and there’s like six girls going to martial arts now. It doesn’t seem like much, but when we started, we were the only ones,” Olari said.
Along with the young girls she has encouraged to join MMA, she has also been inspiring her friends to live a life full of self-confidence and maturity.
“Knowing mixed martial arts helps her [Jaina] if she’s ever bullied, or someone’s pushing her around. She’s able to fight back and stand up for herself. I love that she is this strong, independent person,” Tekayla Stuart, freshman, Olari’s friend for three years said.
Olari’s family has always had her back. Through the tough times and the triumphs. They continue to support her in her everyday struggles. From the many injuries Olari has suffered to her late night practices, and long grueling competitions.
“I think probably the qualities that most help her to be successful in MMA is probably her dedication and her perseverance. She doesn’t give up, she doesn’t let the things that seem difficult to her overwhelm her. She goes ahead and thinks about it for a while and comes up with a plan on how to overcome them. She just continues, whether or not she’s good at something or not, she just continues. Because that’s who she is, she just wants to keep learning as much as she can,” Sue said.
Mixed Martial arts is a combination of many sports. It teaches you how to be ready for any situation life throws at you. It can prepare you for the worst case scenario both mentally and physically.
“I believe mixed martial arts is basically a mix of wrestling on the mats except we have a little bit less rules, and you have to be able to spar bigger guys than you, cause the whole point is to be able to learn how to defend yourself. But most of the time, you have to go against bigger guys so that it’s like the closest you can get to a real life scenario,” Olari said.
As the year goes on, Olari can see the thing she has been practicing for all year, her 5th degree black belt, at the end of the tunnel. After she received her 4th degree black belt this past year, she has kept the finish line in sight. Only six more belts, until she reaches the highest ranking, the coveted tenth degree black belt. Through this whole journey, the pain, the growth, the endless routines, six hour tournaments, and the 16 past belts, her family has been there through it all, and they couldn’t be prouder.
“I really couldn’t be more proud of the time and the effort and the quality that she puts into her martial arts, and I hope that she continues, and I think that she will. Because martial arts isn’t a sport, like many sports are for a time in your life. Martial arts really can be a sport for a lifetime. Something that you can continue to pursue, continue to perfect, and just watch it help her grow into the person that she’ll become,” Sue said.