Down the Keystone Trail

Seniors run 13.1 miles through Askarben, instead of doing track 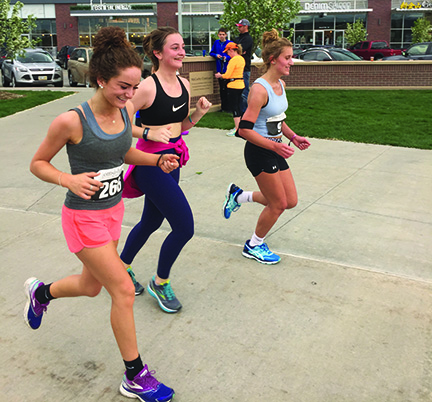 Burning muscles, aching joints, ragged breath, pain that increases with every breath taken.13.1 miles of running up and down the Keystone Trail in Aksarben. That is exactly how three seniors spent their Saturday morning on April 15th. Hannah Meade, Gina Marcuzzo, and Sophia Anderson made the decision to quit running track this year in order to train for the Omahalf, a new half marathon in Omaha.
“After cross country season, I decided that I liked long distance running more than the sprinting I ran during track, so I decided to try a half-marathon instead,” Meade said.
In 2015, 1,986,600 people in the USA ran a half-marathon, that is 0.62% of our population. About 3% of those runners are under 20 years of age. That is an incredibly small amount in comparison to the magnanimity of our population, and Meade, Marcuzzo, and Anderson contributed to it.
“It was for sure mostly adults. I’m not sure if there were any other people our age doing it; if there were, we didn’t see them, that day” said Marcuzzo.
Even though the joggers are running more than 13 miles, they were met with concessions and encouragement during their race. Runners consistently high fived other runners while passing each other, drinks and candy were handed out every mile and a half, people were set up to cheer at strategic places along the course, and cookies and brownies were given to everyone after the racers were done running.
“When we got to mile ten it was great because we knew that we were almost done and could relax! They gave us candy at the water stops, which is really nice and gave us something to look forward to!”said Marcuzzo.
Though the girls thought it was a fun and positive activity to do, they all agreed that running a half-marathon is definitely not all fun. Running almost all of the 13 miles down a cement path with nothing to look at, straight into the wind, is not considered a simple feat. Especially with a monotonously flat course.
“It was hard. It was definitely a lot harder than we thought. The wind was against us the whole time and eventually we decided to run in intervals, meaning we would walk for a few minutes, and then run for a few minutes,” said Meade.
The runners had to run 6 miles down the path, heading straight into the headwinds, because the turnaround point was half way, so they were able to finish the last half of the run with the wind at their backs.
“The last half was pretty hard because every mile was marked with a sign telling us how many miles we had left, and it was really discouraging seeing that we still had a lot of miles left,” said Anderson.
Most competitors put in extensive training before competing in a half marathon. Mainly because the average person isn’t strong enough to book it for 13 miles, they have to gradually build up endurance and train themselves to tolerate the pain. There are apps with daily workouts plans, downloadable calendars, and even blogs or youtube channels that will help runners lay out a plan. However, the girls didn’t put much work into following an extensive training process.
“I didn’t follow a guide or anything when preparing because I thought I would be ok without following one, you can find schedules to follow, but I wasn’t smart enough to do that! So I just asked advice from my aunt and uncle that are on the Olympic Running Board, which was great, but I really should have followed a set plan! ” said Anderson.
Though they all had a difficult time, all the girls all say it was worth it. All three girls agree that they will train harder next time. Above all, they unanimously say that everyone should try it if they haven’t.
“I feel really accomplished that we accomplished this goal together, and it was a great way to finish my senior year,” said Anderson.
Meade, Marcuzzo, and Anderson endured the burning muscles, ragged breath, and overwhelming pain, all to be able to say that they ran a whole half marathon. Ending their senior year on the high of hundreds of people cheering, complimentary sweets, and medals, for the seniors that ran the Omahalf, the 13.1 miles of difficulty were worth it.