Flag football team unites students with and without disabilities 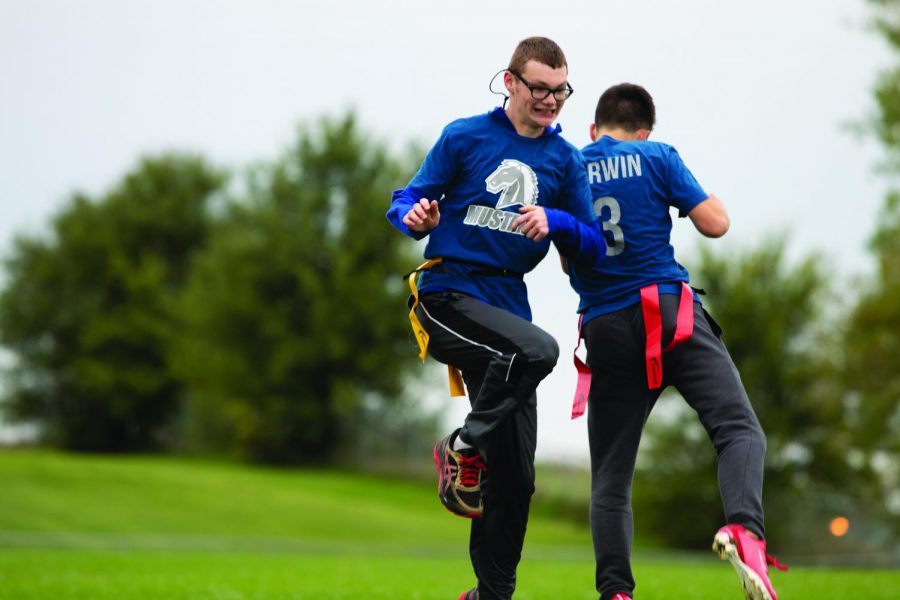 Sophomore Ryan Rauert and and 2019 graduate Zach Corwin congratulate each other on their team's touchdown. The MN Unified Flag Football team

It’s 10 o’clock in the morning. Dew covers the field of Millard North Middle School. The sun hides behind the clouds, and a breeze brings a slight bite to the air, but students aren’t bothered as they get into position for drills. Unified Flag Football practice has begun.

The Unified Flag Football team is an all-inclusive team, created to give students, with and without disabilities, the opportunity to play football.

“It’s important for people of all abilities to have fun playing competitive sports together. [Football] is a sport that not many get to play, and we wanted to share that with others,” co-founder Roshelle Campbell said.

Campbell started coaching the Unified Basketball team this January. Her daughter, MN alumnus Mariyka Campbell, was on the basketball team before she graduated. After their season ended, Campbell and her niece, fellow coach Shay Sahner, decided to start the Unified Flag Football team.

The team is run through the Nebraska Special Olympics, but only MN students and alumni can participate. One of those students is senior Harper Jones.

“I like to watch football a lot. I thought playing would be hard, but I wanted to try it,” Jones said.

Junior Nate Bope also plays on the team and has played with Jones on the bowling and basketball teams.

“Harper is a link that you can’t take away. Without him, we wouldn’t be able to do the things we do. He brings this light to the team that we need to keep us going,” Bope said.

Jones and his teammates have taken an hour to practice every Sunday morning since school started. They do warm-ups, run drills, and end practice with a scrimmage.

“They all interact like they have been playing together for years. Most of the players knew little about football when they started, but Harper and all of his teammates have grown so much during the season, not only as football players but as teammates,” Campbell said.

The team is heading to the Unified Flag Football State Championship in York over fall break, on October 19. They’ll face off against teams from across the state, including Papillion LaVista and the West Omaha Warriors.

“I’m sure we’ll do great, but it’s not all about winning for us. Win or lose we get to play together and have lots of fun, and that’s more important,” Bope said.